In spring 2021, Elliott Hinson ‘20 was looking for a job in the public policy field while managing a swim facility. He was feeling pretty cooped up in the midst of COVID-19 lockdown– until he remembered a hiking trip he took in 2014 with his father and brothers. While his family was on their 13-mile hike, they met someone taking on the 2,200-mile Appalachian Trail.Hinson was awe-struck.

“I knew that there was a difficult and life-changing challenge out there,” said Hinson “Given the opportunity, I wanted to try it.”

So, he did. In March 2021, Hinson set out for the Appalachian National Scenic Trail, which spans almost the entirety of the East Coast of the United States, between Springer Mountain in Georgia and Mount Katahdin in Maine. The Appalachian Trail Conservancy asserts that it is the longest hiking-only trail in the world, and more than 2 million people hike on parts of the trail each year.

The potential to get physically active, relieve some mental stress, and seek out adventure pushed Hinson to pursue the trip.

Hinson geared up with a lightweight tent, sleeping bag and cookware. He said beyond the usual day-long hikes he did about once a week ahead of the trip, he didn’t extensively prepare. He “wouldn't recommend this approach though,” he noted–there is already a small success rate. Half of the people who attempt to hike the trail quit within the first 100 miles.

Hinson pushed past the challenges he faced on the 6-month trip, namely the physical and mental strain. He said that the parts of the trail in New Hampshire and Southern Maine were the most physically demanding, but it is the mental strain that most people struggle with.

“The challenge is daunting,” he explained. “On top of that, it's entirely self-driven. You have to want to be out there.”

Even though quitting was just a phone call away, Hinson reminded himself every day that the struggle was worth it, especially for the people he met. “There is such a community of trail angels, people who help hikers, and your fellow thru-hikers,” Hinson recalled.“These people become your trail family, a.k.a. ‘tramily.’” 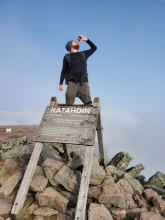 Hinson made it to Mount Katahdin on October 8 after 192 days of hiking. Completing the challenge was an emotional experience –he said he cried like a baby at the end of the trip, from feelings of accomplishment and sadness at the journey being over. Hinson described it as the hardest thing he had ever done, and wanted to savor the “indescribably elated” feeling he had upon reaching the end of the trail.

“In SPP we learn how to deal with large and often forever persistent problems,” Hinson said “It is easy to get discouraged. However, on my journey I saw the impact that policy has made on the world.”

The Appalachian Trail exists because of policy decisions, and Hinson said that his journey reinvigorated his passion for fighting for a sustainable future and the importance of keeping nature accessible.

His advice for anyone interested in hiking the trail is to try it for a day, or even overnight – and pack light.

“All you need to start is a bag, water, flashlight, and some snacks,” Hinson said. “The trail is beautiful and can really help you unwind and connect to nature.”

New analysis finds research historically underestimates the energy poverty burden for households in the U.S.
May 16, 2022
Dan Nees appointed to Interim Executive Director of the New Resilience Authority
May 10, 2022
Patience and Environmental Policy in the Federal Government: Jomar Maldonado MPM ’03
May 5, 2022