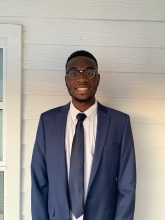 Oluwatoni Elewa-Gidado (Toni), a third year public policy major, will interview University of Maryland alum Gideon Epstein '19 about his experiences working to advance voter rights and equality while at UMD and at the Lawyers Committee for Civil Rights Under Law. Gideon’s work focuses on state and federal voting advocacy and the continued efforts to end voter suppression. Toni and Giedon will engage in a discussion regarding the policies created to protect voting rights in the United States and how the SPP community can support those efforts. The two will conclude the conversation leaving faculty, staff, students and the public with a call to action on ensuring this essential component of democracy is strengthened.

About Gideon Epstein
Gideon Epstein is an Election Protection Organizing Fellow with the Voting Rights and Election Protection teams at the Lawyers’ Committee for Civil Rights Under Law. Gideon completed his B.A. is Government & Politics from the University of Maryland in December 2019. While at the University of Maryland, Gideon worked to engage young voters ahead of the 2018 midterms. His work with the campus-based TerpsVote civic engagement coalition led to an increase in campus voting rates from 19% in 2014 to 46% in 2018. Since December of 2019, Gideon has been working with the Lawyers’ Committee for Civil Rights Under Law’s Election Protection team to do state-based organizing in SC, MO, MD, NE, and NM. Gideon co-chairs the Election Protection coalition’s Communications Working Group, leading digital communications efforts. In his free time, Gideon loves to cook for family and friends, play tennis, and go to Nats games.”

About the Black Friday Webinar Series
Black Friday is a webinar series discussing the discounts Black people have been forced to take due to flawed public policy. The series will explore the disparate treatment and impact of public policy in the United States – both historically and to date – on racial outcomes in areas such as housing, education, healthcare, gender identity, criminal justice and wealth. Centuries of federal, state and local policies have cemented systemic racism into our institutions, our culture, and individual's explicit and implicit bias.  Through a series of lectures, articles, videos and other educational material, we will demonstrate how the intersection of policy and practice can be used to address chronic issues that exist in Black communities as a result of flawed (or simply absent) policies and practices.  As a policy school, we hope that these webinars will educate and inspire conversations in an effort to promote accountability and seek remedy for deficiencies in policies that have disproportionately affected Black people in this country. This series is co-hosted by Executive Development and the DIB Task Force.