by Nate Hultman and Wojciech Krawczyk

A new paper—A near-term to net zero alternative to the social cost of carbon for setting carbon prices—tackling the problem of how to reach long term climate goals with near term policies was published this week in Nature Climate Change, as the result of a joint research project partnership between the Center for Global Sustainability (CGS), Columbia University, and Smith College. The paper, led by Noah Kaufmann at Columbia University and co-authored by CGS researchers Haewon McJeon and Wojciech (Ted) Krawczyk, along with Alexander Barron and Peter Marsters, presents an important alternative approach to estimating CO2 prices needed in the near-term for consistency with a net-zero CO2 emissions target—called “Near-term to Net Zero” (NT2NZ).

Pathways to climate-friendly energy futures depend on taking immediate but incremental steps today to begin restructuring the energy economy rapidly and in an ordered way to support rapid decarbonization. A long-standing challenge is therefore how to encourage the steps today that are in line with a long-term vision—even if actors don’t think of the long-term view but are just responding to immediate incentives.

This is where the NT2NZ concept comes in, and provides an improvement from alternate attempts to solve this issue, NT2NZ CO2 prices are designed to accommodate uncertainties and measurement difficulties, and to align with real-world policy objectives. In this sense, they provide an improvement on some of the limitations of an alternate approach called the Social Cost of Carbon (SCC). In contrast, this analysis more effectively illuminates the causes of relatively high or low estimates for needed CO2 prices—particularly from other, complementary policies and oil price volatility.

The authors’ application of the NT2NZ CO2 approach gave an illustrative range of CO2 prices for the United States for a 2050 net-zero target from $34 to $64 per metric ton (in 2018 dollars) in 2025 and $77 to $124 in 2030. Compared to the commonly used approach to estimate ideal CO2 prices, the Social Cost of Carbon (SCC), the NT2NZ price range is significantly narrower, as SCC comes with a high degree of uncertainty. (Meta-analyses find recent SCC estimates that range from under $0/ton of CO2 to over $2000/ton.) 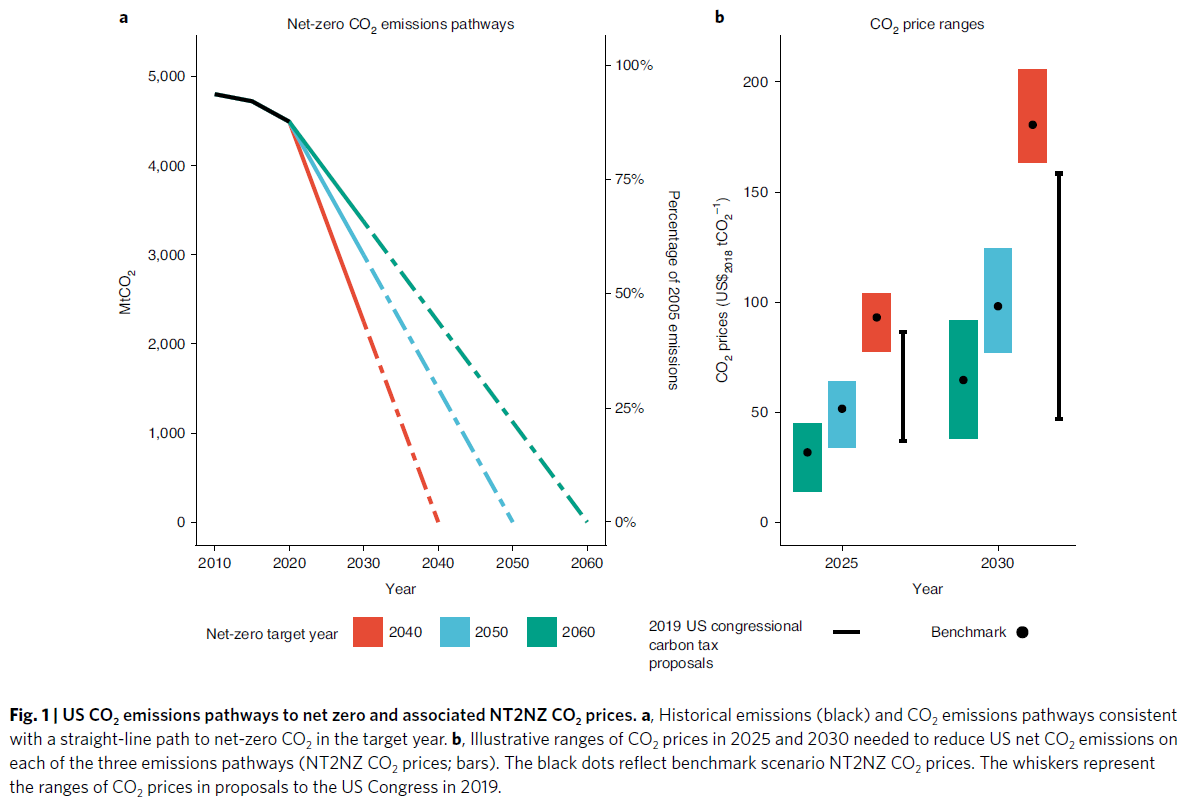 The analysis used the same modeling platform and the standard assumption set used for the U.S. Mid-Century Strategy, a major Obama White House report on future decarbonization strategy published in 2016. Under this new research, the authors developed scenarios and analyzed multiple pathways to the net-zero target. The NT2NZ approach selects three paths towards net-zero CO2 emissions targets in 2060, 2050, and 2040 to reflect a range of emissions pathways discussed in recent years by U.S. policymakers. These pathways correspond to 2030 CO2 emissions of 35%, 42%, and 57% below 2005 levels, respectively. Consistent with both economic theory and policy practice, the paper assumes the CO2 price is surrounded by complementary policies that address separate market failures: efficiency policies, air pollution regulations, and early-stage support for the deployment of low-carbon technologies (e.g. solar PV, electric vehicles, etc.).

The NT2NZ approach presented in the paper does provides a credible range of CO2 pricing estimates using transparent and relatively simple methods, with an option to follow multiple scenarios to achieve the net-zero target in a given year. It enables policymakers to consider both qualitative and quantitative information about climate science and economics when selecting a net-zero target. Models can then estimate the CO2 prices for cost-effective reductions in the near-term, when their projections are most useful, with the understanding that policy details can be updated as uncertainties are resolved. The paper’s approach provides a robust improvement to the commonly used SCC approach for setting carbon prices to reduce carbon pollution and climate change impacts.

Download the full report. This research is the latest contribution from CGS, along with our partners, to help inform and catalyze action in the U.S towards a low-carbon economy. Learn more about our projects and research.

Wojciech (Ted) Krawczyk is a co-author of the paper and regular researcher and alum of CGS, he currently a Fulbright Scholar at the Department of Analyses and Reporting at the Ministry of Assets in Poland. Nate Hultman is the director of CGS.